Want to edit pictures but don’t know how to use photo editing software? You’re not alone; it’s a problem for millions of people. The editing tools we have today are super complex, and even professionals have to spend hours to complete the editing.

But worry no more.

VanceAI has now “rescued” people from paying hundreds of dollars to the editors and designers for doing image editing. The company has launched more than a dozen photo editing tools, and VanceAI Image Upscaler is one of them.

With this Upscaler, you can enlarge photos (without any quality loss) with a few clicks only. Yep, it’s true!

Let’s dive into the details.

VanceAI Image Upscaler is one of the best products of the company, which thousands of people use every day to do AI Image Upscaling online of their favorite pictures.

It is developed with the power of advanced AI algorithms and Deep Learning technology to make it super efficient. That is why it will only need a few clicks to do the upscaling images online automatically.

You won’t have to spend hours using brushes, scales, layers, and whatnot like you do with other famous editing programs. You will only need to drag the images there, choose the enlargement settings, and that’s it. The whole thing won’t take more than 10 seconds.

Impressed by this VanceAI Photo Enlarger? Then you should have a look at its topmost features.

So, if you haven’t given VanceAI Image Upscaler a chance, I say go for it right now. You will become a fan of VanceAI (just like over a million other people).

But wait. I’ve got an awesome suggestion for you.

When you (AI) upscale images with VanceAI Image Upscaler, give other VanceAI products a try as well. Use an AI Photo Enhancer, AI JPEG Artifact Remover, AI Portrait Retoucher, AI Photo Dehaze, Image Compressor, and AI Passport Photo Maker to take your favorite images to the next level.

Now, it’s time to know how you can use VanceAI Image Upscaler to AI upscale images.

How to Use VanceAI Image Upscaler? 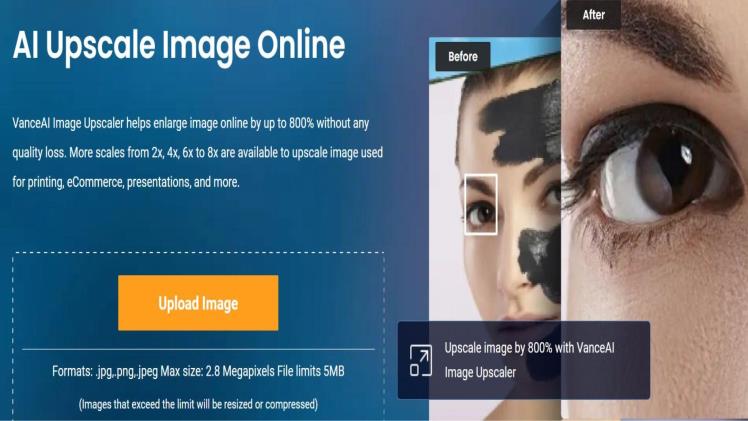 Step 2: Select the AI Model and how much you want to magnify. When you choose the options, click on “Start to Process” to enlarge images.

Step 3: In a few seconds, the uploaded image will be enlarged, which you can easily download to your device.

Another way of enlarging photos with VanceAI is the Workspace method. Open the browser and go to VanceAI Upscaler Workspace to (AI) upscale images. There, drag or upload the picture (or even a folder) you want to enlarge. Next, choose the options about how much you want to upscale. Choose carefully as the output image depends on it. Then, begin the processing to do AI Image Upscale.

It will take a few moments, and the image you uploaded will be enlarged with no quality loss.

VanceAI Image Upscaler is perhaps the easiest online editing tool there is to (AI) upscale images. A few simple clicks will do the upscaling for you in less than 10 seconds only.

So, if you don’t have any idea about how to do Image upscaling, you will still find it easy to use VanceAI Image Upscaler.

When you upscale one picture, you will then realize that choosing VanceAI Image Upscaler was one of the best decisions you have ever made. This tool gives you different magnification options (2x, 4x, 6x, and 8x). Choose according to your requirements and then check the results.

There won’t be any blurriness, blockiness, or pixel problems. Furthermore, VanceAI Image Upscaler also brightens the colors and improves facial details, which will turn the picture into HD quality.

Here’s a “Before vs. After” of an image upscaled with VanceAI Image Upscaler.

The image on the left had blurriness and some grains on it, which made it dull. But after upscaling it with VanceAI Image Upscaler, it got upgraded to the HD quality.

Check out another “Before vs. After” example.

The monkey’s picture was overall of poor quality. But when it is upscaled with VanceAI Image Upscaler, it feels like the photo was clicked from a DSLR camera.

That is why I recommend everyone to give VanceAI a try to (AI) upscale images!

All-inclusive, if you are looking to enlarge some photos, there is no better choice than VanceAI Image Upscaler. It is an easy-to-use VanceAI product that can upscale your photos up to 800 percent with just a few clicks only.

There won’t be any loss of quality as well because this Image Enlarger tool uses Top AI algorithms.

So, go for VanceAI Image Upscaler without any hesitation.

What Can I Do With BGremover?

That’s not it. BGremover also offers you new background options when you are done with the removal.

What Can I Do With VanceAI PC?

VanceAI PC is a photo editing software for those who edit images on PCs. With this software, you can easily upscale the pictures and enhance their quality by reducing noises and blurriness. Furthermore, it can also sharpen the photos, which will make them look more natural.