VanceAI is a platform that makes photo editing pretty simple for users as it can be a hassle at times, especially for the kind of users who are not experts or have little knowledge about the mainstream photo editing software applications. The mainstream applications do have strong merits, which is part of the reason why they’re still going strong, but many users would rather delegate photo editing tasks than do everything themselves. Not to mention that some photo editing tasks, such as improving the smaller details of an image or removing backgrounds, can be quite frustrating for inexperienced users since those tasks are more complicated than mere image cropping or similar. With the help of AI based tools, users can automatically get results and not worry about how to edit or enhance an image. They can rather focus on other tasks and save time.

VanceAI.com offers two types of series, with one of course being the Productivity series and the other being the Creativity series. With a good range of photo editing tools, users will also save time by having one platform for most kinds of photo editing solutions. VanceAI, as of yet, offers tools that are mostly involved in common photo editing and enhancement. A combination of VanceAI along with an application that allows for visual content creation from scratch can virtually eliminate the need for a photo editing software application. Considering that more and more applications are moving towards automatic image processing, getting familiar with VanceAI seems like a great option.

VanceAI is definitely a good choice for beginners as it is not only available in multiple mediums but also because it follows its design philosophy everywhere, making it easy to use. Besides the VanceAI JA addition, the platform has also moved to desktop software. If you click on the Free Download button, as shown in the image above, you will be redirected to the download page of VanceAI PC. The software application does not yet have all the tools from the website except the essential ones. Regardless, it is designed with users in mind and hence, they should have no problem learning the software quickly.

Other than that, the website also offers other cool features such as Workflow and Workspace. The former is for queuing up various VanceAI tools so that they can work on an image together for a combined effect. Apart from the software, VanceAI offers an API version of its application as well. The online version, API, and software all come with different subscription models. 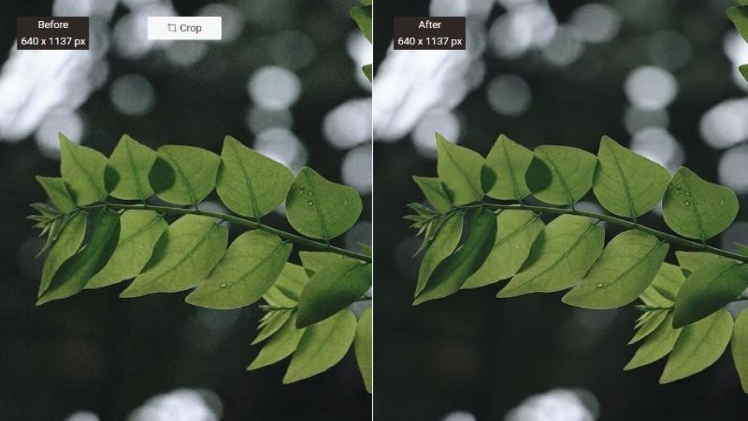 Image noise or film grain can be a good or a bad thing for your images and it depends on how the image noise is implemented in the photo. In situations wherein the image noise is a bit too much and is affecting the quality of an image in a bad way, you can use VanceAI Image Denoiser to get rid of it almost completely. Not to mention that it is practically effortless as the AI based algorithms do all the work for you. As a user, you still have some manual options to benefit from. You can use the image noise related options in the Workspace to control how strongly you want the tool to remove the image noise from the image. Moreover, you can expect the tool to provide great results within a few seconds.

The Image Denoise threads a fine balance between removing image noise and removing the textures of the object in the photo. In this case, the result is pretty good though a better image could be made possible with the right settings. In such cases, setting the image noise reduction to high will cause the tool to remove a bunch of details from the image along with the image noise, which is of no use. The Auto Parameters option is recommended or the user can experiment with different settings each time.

Photo quality enhancers can be quite valuable to professionals and users who would like to use high quality visuals to their advantage in terms of promotions, content, sales, and more. Luckily, VanceAI Image Enhancer makes it very easy to enhance photo details and make images look high definition. Moreover, the Image Enhancer can provide improvements even to high quality images through color tone upgrades, lighting management, and more. You can access the Image Enhancer by clicking on the Enlarge tab in the Workspace. Image Enhancer, Sharpener, Enlarger, and Denoiser share the same Workspace and are just one-click away. Once inside the Workspace, you can click on any of the options provided to enhance the image properly. The options here are Standard, Art, Text, and Anime.

The Image Enhancer usually makes the final image appear smoother than before and it manages that by getting rid of some image noise. In this case, it does the same, as you can see by looking closely at the towers themselves. Due to this, the colors present in the image look much more dominant. This tool can be especially useful for enhancing product photos because the tool can upgrade the finer details of an image pretty well.

It is easier to deal with unwanted image blur effects with a tool such as VanceAI Image Sharpener because of its expert AI based algorithms and additional features. When you click on the link and get to the Image Sharpener page, use the Upload Image button. Once in the Workspace, you can select the type of blur that you want to reduce from the image. You will see the options saying General, Lens, Motion, and Soft. Interact with them to reveal further info about each option. Each option has its specialty but you can still use the General option to do a basic image deblur. The tool will reduce image blur and provide the final image within seconds. Additionally, you can also use the other options in the Workspace before processing.

After removing some level of blur from the image, users will most certainly see the difference between both the images on display here. The After image definitely looks much sharper than the old image. However, this effect isn’t applied to the entire image evenly. By looking at the image carefully, we can see that the tool focuses mainly on the focus object of the photo. In this case, it is the person’s hands and the string that is held. The background is pretty much the same but that is expected. This image sharpener actually gives a robust app design and options.

4. Create 4K Resolution Images and Beyond with VanceAI Image Upscaler

There is a clear difference in the two images that are on display here. While the After image is 4 times bigger than the original in terms of resolutions, it still has better contrast as well as color tone in comparison to the image before.

5. Create Refreshing New Images from Old Ones with BGremover

With BGremover, you can remove background from images with ease thanks to the AI technology implemented in the tool. Moreover, VanceAI has added new features into BGremover that enable users to pick or upload their own background photos as a replacement to the empty backgrounds of the images that are processed with this tool. Essentially, you wouldn’t need to look for multiple tools to edit your photo, as everything can be done from one place. Once you process an image, you can also use a brush tool to edit an image further by marking spots on an image that you want to remove or keep.

Speaking of this example image, the BGremover tool from VanceAI can be said to have remarkable accuracy. By clicking on Change Background in the Workspace, users can either replace the empty background with a solid colored one or a scenic one. Otherwise, upload a background of your choice.

VanceAI Photo Editor is a different sort of tool from VanceAI as it houses multiple image editing tools within one framework. In this tool, you can have access to features like image cropping, image rotating, eraser tool, and more. You can also add graphical elements and text on top of the image. The UI is designed in a way that lets you see every change that you make to the image, which is quite helpful for longer editing sessions. When it comes to cropping, you can either do it manually or you can select a ratio that matches with social media ones, such as Facebook cover, Twitter profile photos, and more.

You can also make a VanceAI account from the main page. With an account, you will keep receiving 3 image credits per month for free.

VanceAI alternatives are nothing but smaller versions of VanceAI tools. They are provided by VanceAI for free though they lack the sophisticated design and features of the VanceAI platform. You can go to photoenhancer.ai to improve image quality without upscaling. To upscale images along with it, you can instead use image-upscaler.com. And if you are interested in art, VanceAI Art Generator can even help you to become an AI artist. Other than this, VanceAI also provides a free to use and website based PDF processing tool that you can access by clicking on VancePDF.com.

As the title suggests, VanceAI Productivity series and the platform as a whole certainly makes photo editing pretty simple and quick as well. Users should have no issues getting started with this platform and making full use of it. A VanceAI subscription is worth recommending as it gives users more room to experiment with images and use tools more extensively. Tools such as VanceAI Photo Restorer and AI Art Generator may require more than one credit for image processing. The UI design of VanceAI is one of the best things about the platform, with the Workspace and Workflow features being the highlights. Overall, the series is highly useful for users that would like to focus on other aspects of work while AI does the photo editing for them.